Our Brexit preferences are far more complex than politicians allow for

Political rhetoric loves a dichotomy: from Leavers-Remainers to Soft Brexiter-Hard Brexiter. But do the views of the public mirror those of the politicians?

The political rhetoric on Soft and Hard Brexit is, by now, familiar. On the soft-Brexit side, politicians advocate for a closer relationship with Europe, with continued tariff-free access to the single market, and staying inside the customs union. Advocates of the hard Brexit position, on the other hand, would prefer to keep Europe at arm’s length, and place more weight on matters relating to sovereignty, namely shaking off the jurisdiction of the European Court of Justice and regaining control of immigration.

In our new study, we set out to explore in detail how soft-hard Brexit preferences play out in the minds of the British people.

Which type of ‘left behind’ matters most?

We also wondered what socio-demographic characteristics would be associated with attitudinal positions on Brexit. A prominent narrative after the referendum was that anti-EU feeling was driven by a feeling of being “left behind”. Some sections of British society have not benefitted from modernisation and globalisation, which brought increased affluence, higher status, and better living standards to a greater number. Those who remained in unskilled work with low incomes, the theory goes, increasingly feel resentment towards a political class that has become professionalised, and thus use their vote as a form of protest against the establishment.

Further, for those with scarce resources, immigrants are seen as direct competition for jobs and housing, and these perceptions may well be justified in some contexts.

An alternative (but connected) theory highlights the role of culture and values rather than economics. Beginning in the 1960s, younger, more educated cohorts have increasingly become ‘post-materialist’ and cosmopolitan: being open towards other cultures, immigration and diversity, as well as favourable views towards European integration.

In response to this secular shift, a ‘cultural backlash’ has occurred among the older, less educated, (and male) sectors of society who begrudge their familiar traditional values being gradually squeezed to the margins of society. The fact that older people were more likely to vote Leave than younger people supports the idea of the cultural backlash. Also backing this cultural account, several studies show that national identity (especially Englishness) is associated with the likelihood of voting leave.

We set out to test the different ideas beneath the attitudes. Which type of ‘left behind’ matters the most for understanding Brexit preferences?

In our survey, which was conducted online in the summer of 2017, we asked our respondents to imagine themselves at the negotiating table tasked with getting the best possible deal, as they see it, for Britain. Faced with seven key issues (immigration, sovereignty, the Irish border, the single market and so forth) respondents indicated if they would drop the demand, if they would ‘budge’, or if it was a ‘red line’.

In our analysis we assumed that ‘latent’ (hidden, underlying) preferences were driving the responses to the seven survey questions. We found that two dimensions of preferences could be discerned.

The first dimension relates, quite strikingly, to the archetypical hard Brexit position where items given the most weight are sovereignty and budget contributions, followed by immigration. We call this “the Sovereignty factor”. The second dimension, which we label “the Cooperative factor”, is defined by high degree of importance attached to scientific collaboration within the EU and access to the single market.

We delved deeper into the structure of the underlying attitudes by defining (statistically) classes of people who have a tendency to answer the attitudinal questions in similar ways. These types we then plotted onto the two dimensions of Sovereignty and Cooperation – see Figure 1. 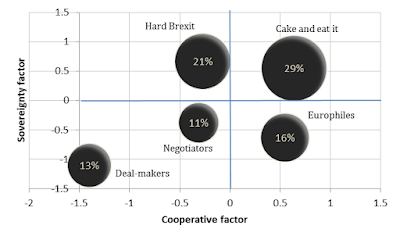 Figure 1: Five attitude types plotted on two dimensions of Sovereignty and Cooperation. Bubble size represents the size of the latent class in terms of the proportion of respondents. The two factor scores run from -1.8 to +1.2 and have a mean of zero.

This is in contrast to the opposing positions of the “Hard Brexiters” and the “Europhiles”: these two groups are more similar to the prominent political viewpoints in which clear distinctions are made between the issues on the table, but the two groups prioritize the opposite issues. Thus, we find that soft-hard Brexit preferences are not either/or in the minds of the British public, and many prioritise all or none of the issues. The two opposing positions together account for 37% of the public’s view. That is, just over one third differentiate between the salient issues in ways congruent with political ideals.

And what about the ‘left behind’ theories? We find that older people have a stronger stance in both directions, being likely to score higher on both the Sovereignty and Cooperation dimensions – see Figure 2. 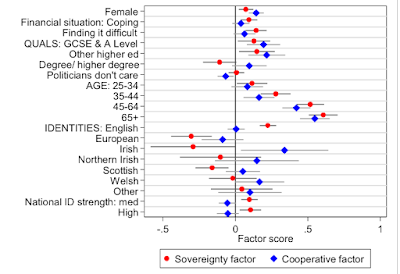 National identity plays a particular role in the socio-demographic profiles of these attitude types, being linked to one dimension or another. Englishness is associated with more weight on Sovereignty issues while Europeanness and Irishness are linked with Cooperation. We find limited support for the economically left behind thesis with financial position and feeling that politicians don’t care having little bearing on preferences.
This article is adapted from a longer piece in the Political Quarterly journal.
Scroll Up